Well it's been nearly a year now since I last worked on my Lil' Patriots (Patriot 2, Patriot 3) so feel it's long over due that I revisit this project. Haven't really thought about it for a while but having recently purchased an interesting new surfboard from Gee-Spot Surfboards which is kind of inspired me to take the board in a new direction. 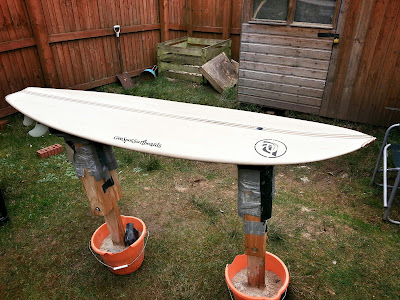 It's a similar build concept, being balsa covered EPS foam under epoxy, though gone a bit fancier with the stringers, nose and tail blocks but more interestingly for me is in the rails. 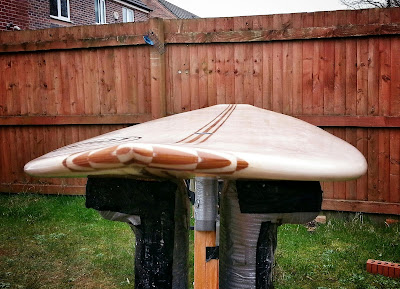 Unlike the majority of my surfboards, and indeed the preceeding Patriots, the rails on this one a really quite thin. This along with an article which has recently re-surfaced on Swaylocks, http://www.swaylocks.com/forums/thick-board-skinny-rails, has got me to thinking how this could be integrated into my Patriot design.

I've previously realised that buoyancy and wave catching has never really been a problem with the Patriot design which I feel allows me to go a lot more extreme with the volume. With my new solid balsa board being aimed largely at surfing small clean waves I'm now seeing an opportunity for creating a paipo-styled bodyboard more adept in larger steeper waves which is where a thinner Patriot with a lot more rocker could be suited.

So my first practical consideration when designing the 4 is the fact that most of the strength of the last two builds has been in the parabolic balsa rails; with a lot of volume taken out of the rails strength will be greatly compromised.

To take account of this then I've re-profiled the board in Aku Shaper and come up with two designs, of slightly varying thickness and rocker, and transferred them onto paulownia stringers (still want to keep the design as light as possible) which should add a huge amount of structural integrity.

Scrubbing Up the Lil' Sim

It's always a bit heart wrenching when you take a lovely glossy epoxy coat and sand it back down to a dull matte but ultimately it's for the greater good. Managed to fit the fin and leash plugs during the week, which was a pain in itself because I lost my darn spade bits. Nice to finally see it finished now after a few hours ruining my arms with the sander this weekend. Need to get a couple of fancy photos of her in the next few weeks then get her in the water, can't wait to see how she goes! 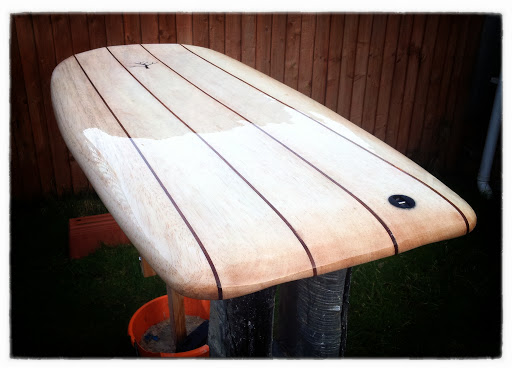 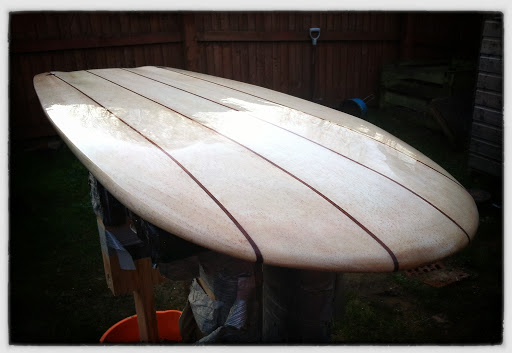 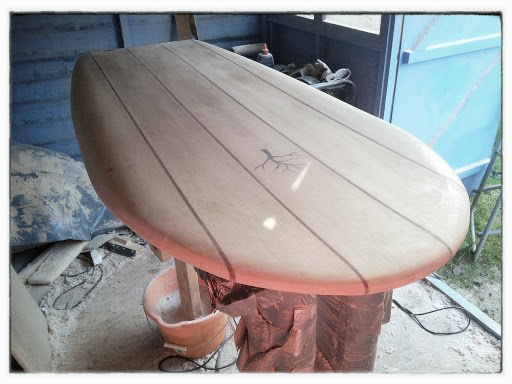 Waiting for glass to dry

Okay then. a quick update on how the balsa board is going. Glassing has finally been finished today, bit of a cock up glassing the bottom where I sanded through the glass in two spots as a result of not removing masking tape in time and having a nightmare trying to remove it but in the main part she's looking good! Still got fin and leash plugs to set which I'll do one evening this week and all things going well I'll give it a final sanding and polish her up next weekend, looking forward to seeing the finished article now. 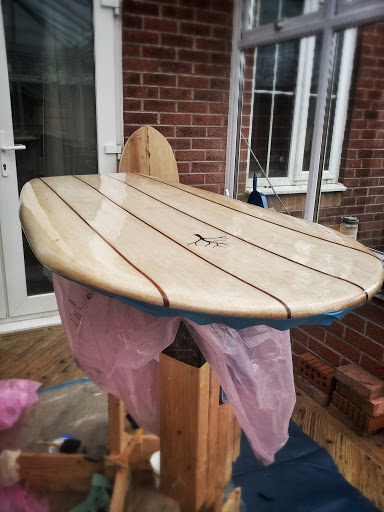 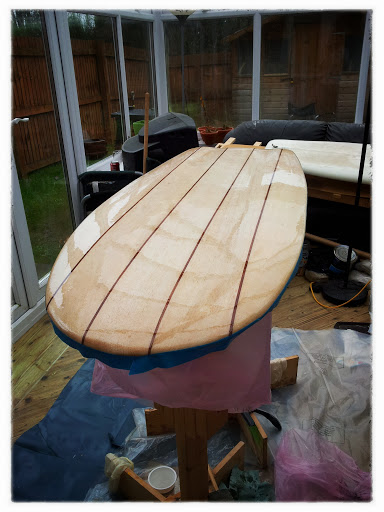