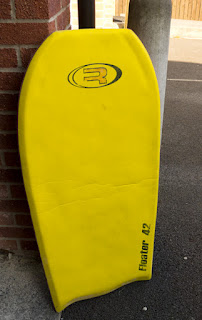 After blowing fifty quid on a new foam bodyboard only for it to develop a lovely fold across the middle on the first decent wave I caught with it (and now relegated to the role of sledge on the infrequent occasions where we actually have sufficient snow to warrent its use), the tight-bastard in me was reluctant to fork out for a replacement.

Making use of the wood lying around from previous projects, the intention was to use foam as a core and glue a wood skin to it, taking advantage of the strength and good looks of wood while keeping the board as lightweight as possible. 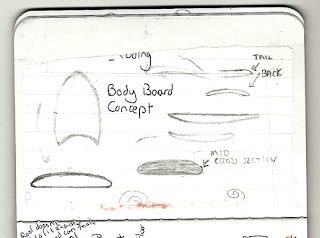 The inspiration for the design came from my 5'10" fish board, scaled down to fit the blank of foam I had. For the first incarnation I wrapped the foam board in balsa for the rails and laid strips of balsa on the base and strips of tulipwood along the deck before final shaping and fibreglassing. The intention was to create a fast board but with a good degree of control.

Speed would be generated with a rolled entry to allow the board to cut through water efficiently with a large, flat planing area in the middle. A fairly deep, wide concave towards the last third of the board would drive water through the twin balsa keel fins. Being very stiff meant it couldn't rely on flex for control like a conventional bodyboard but would mean it could generate a lot more speed. I made the rails fairly round on this board to enable it to deal with choppy conditions better, deeming that I would generally be using this board in less than ideal conditions.

The end result was a board that absolutely flew in the water but still allowed me to turn on the wave. It was also extremely bouyant, possibly too much so on some occasions but it certainly made catching waves easy. The board was heavier than I was hoping for however, due mostly to the tulipwood deck, though did make the board practically bullitproof and certainly solved the problem of the board folding in big waves. 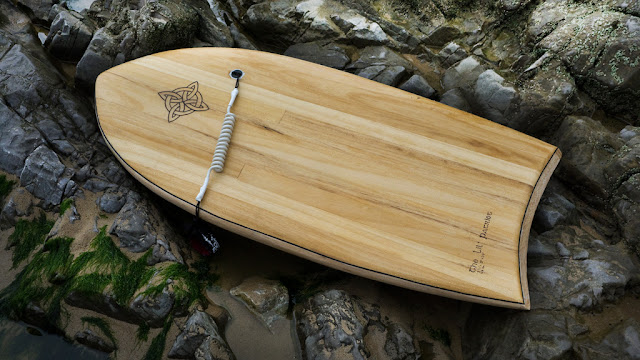