Balsa Board - Coming Together Nicely

With the snow gone and the weather warmer (Saturday was surprisingly nice) I've managed to get the balsa board to a stage of near completion. Rounded off the nose and widened the nose spoon to the edges. The aim with the nose spoon is to reduce some weight by scooping out some volume at the top third where it's not really needed which should also make duck diving easier. I've left more volume through the middle third where most of my weight should be when paddling it, the tail has been pulled up at the back third to add more rocker. 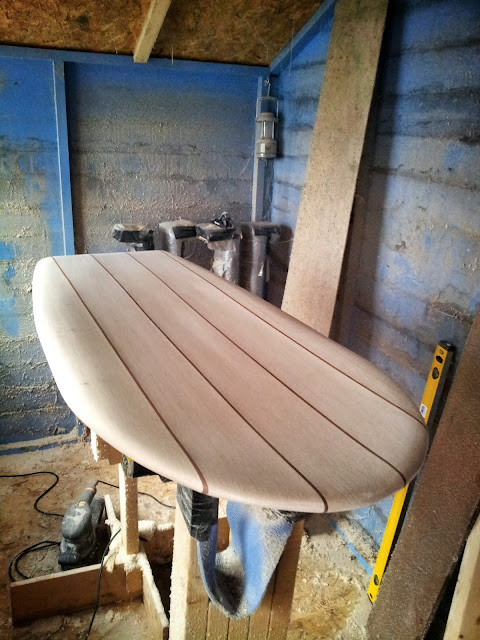 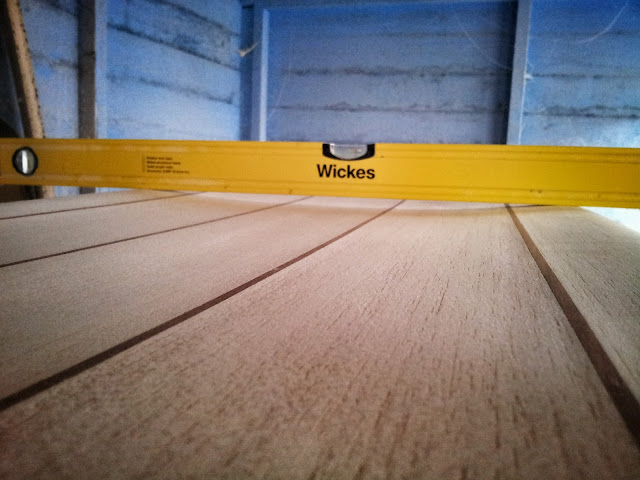 On the base I've gone for a somewhat experimental four stage arrangement with a belly at the front to cut into the water more easily, leading to a flat planing area to build up speed. This in turn gradually leads to a large centre concave before two channels lead inward for the last quarter in the style of my foam bodyboard and similar to the channels on my Catch Surf Beater board. The base also curve upwards towards the rail by about a centimetre from about 7 cm in, similar to the Beater and The No 7 I made last year.  The aim is to have a board that is more than competent finless with the option of adding two small, single FCS tab side bite fins that I will whittle up at a later date. 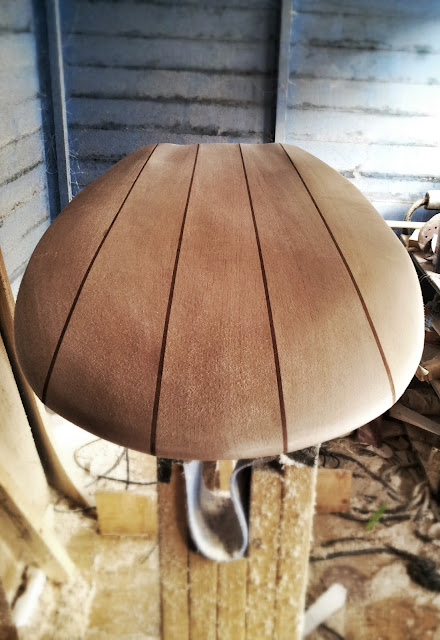 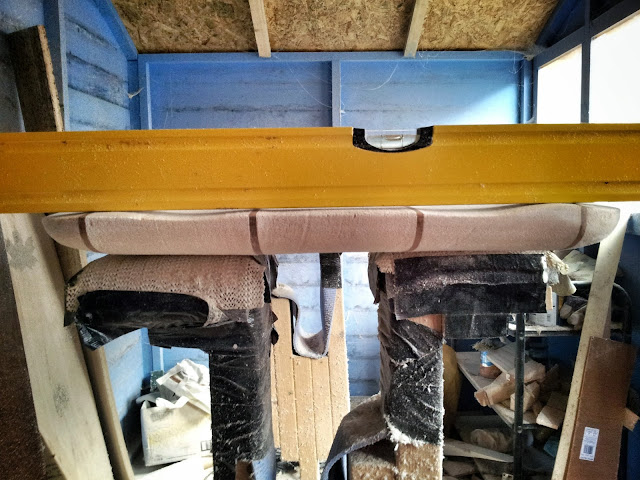 At any rate the board is essentially complete now, planning on spending a bit of time tidying up some rough areas then sanding the whole thing up to a high grit before hopefully glassing it this weekend all things going well!

It was only two months ago I was swanning around in the 30 degree heat of sunny Bali and now here it is, the tail end of a particularly cold January and already I've finished sorting through all the holiday photos I took while I was there, that's certainly got to be a record for me! Saying that though I still have an awful lot of video to sift through too. Anyway this is the link to my Flickr set:

From Seed to Surfboard 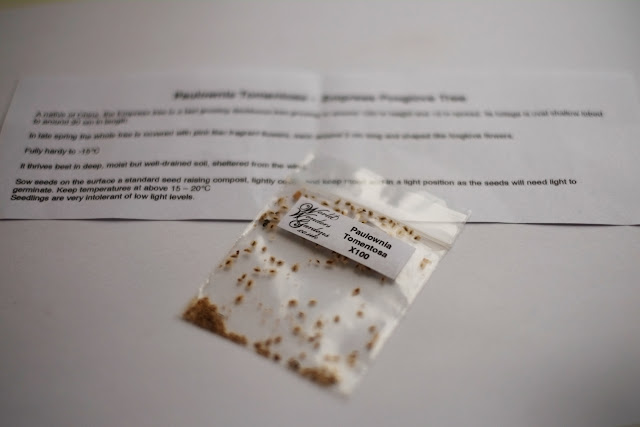 Watched Nathan Oldfield's latest The Hear & The Sea and was quite intrigued with one section showing the creation of a surfboard from it's very beginning, with the planting of a paulownia tree to the milling of the wood and the creation and surfing of the board. As is typical, monkey see monkey do so I've been on the Internet and ordered some paulownia seeds ready for planting in the spring and hopefully in ten years time I'll be surfing my very own homegrown board!

The Heart & The Sea: Official Trailer from Nathan Oldfield on Vimeo.
Posted by Unknown at 14:35 No comments:

Not too sure how much work I'm going to get done this weekend, what with there being so much snow around and my bargain basement snowboard hanging about in the garage thinking that I should man up and learn to snowboard, but here's a little video I knocked up yesterday while testing my shiny new GoPro Hero 3 Black. Bodyboards are not just for surfing.

Making boards while the sun shines

Been a surprisingly nice day today, even if at has been bastard freezing, so nice in fact that I had to brave the freezing temperatures to go for a morning surf down Llangennith, shoulder high, a gentle offshore and the occasional iceberg. 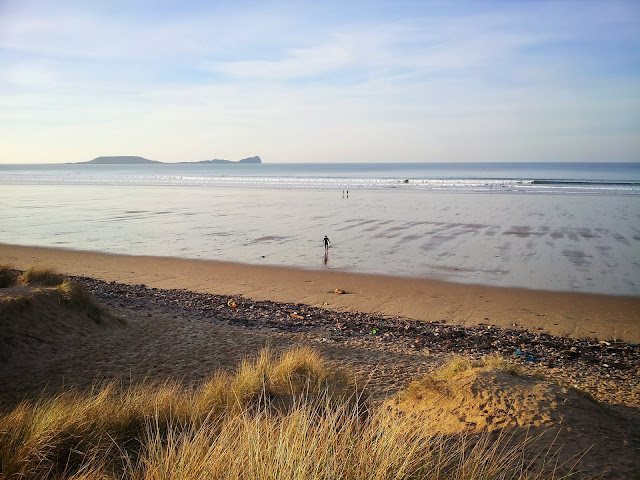 Have managed to get some work done on balsa bodyboard too though so been a fairly productive weekend. First task was to sand in a bit more bottom rocker and flatten the base ready for some concaves. The rails were sanded back by just over a centimetre deep by seven centimetres wide, similar to that of my Catch Surf Beater, but I also added a centimetre deep concave too, two changes will complete the bottom. Hoping to make a board that is proficient when finless with the option of adding a pair of mini keels when more control is required. 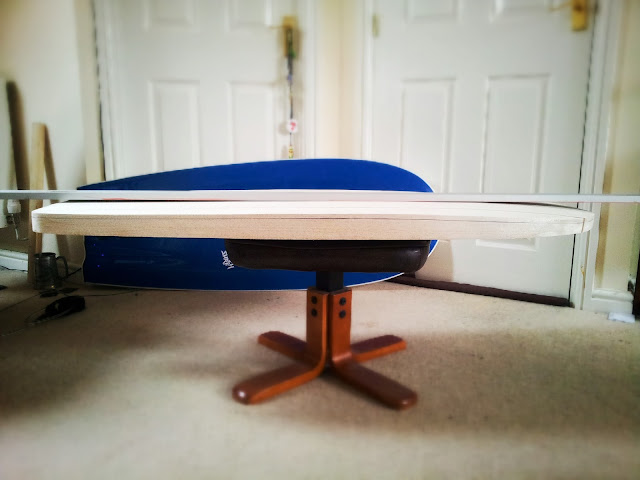 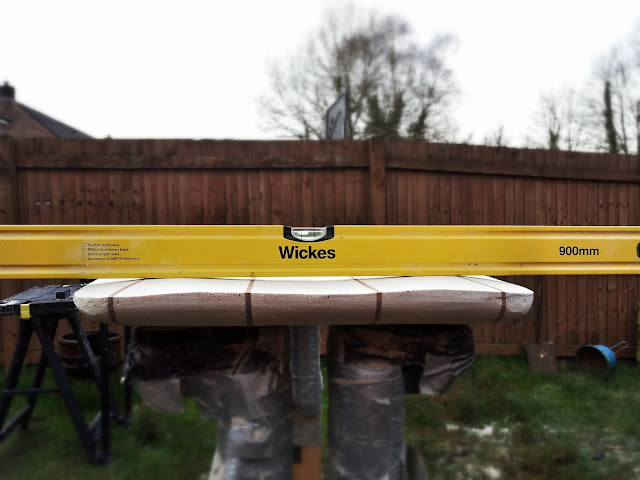 Also managed to start on the deck too, spooned out a large area towards the nose keeping a lot of volume around the hard rails. Some more shaping is required on the nose then I just need to refine the shape a bit more and smooth it all off. Hopefully the shaping should be completed next weekend, pretty quick work for me! 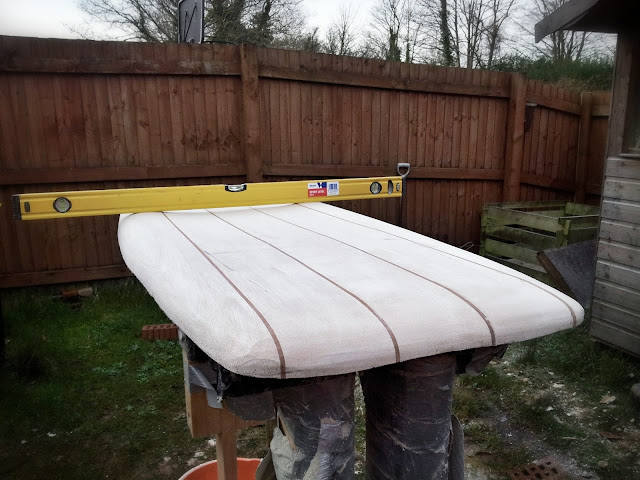 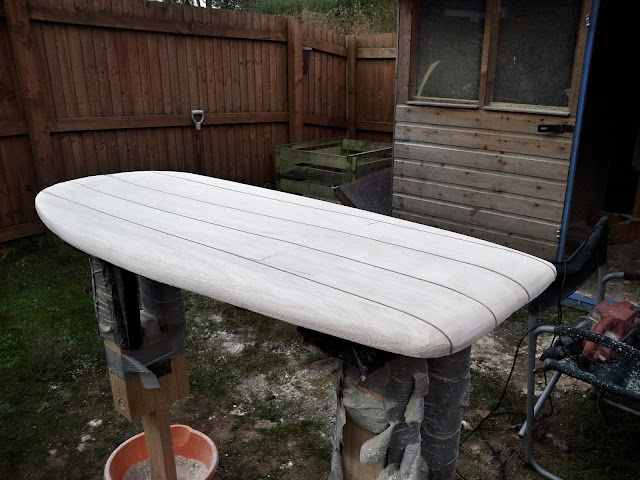 Recommend you take a glance at Chris Burkards Blog, some great photos and videos with a surf bias. Good show Mr Burkard.
Posted by Unknown at 10:45 No comments:

Well the after effects of strolling in at four in the morning had slowed down my progress a bit today but I managed to get some work done. The blank was fully glued together during the week and the shape of the board traced out, so today I have managed to cut the board out and made a start on shaping the bottom rocker.Would have liked to have finished that work today so I could have started tracing out the concaves and channels but looks like that may need to wait till next weekend. 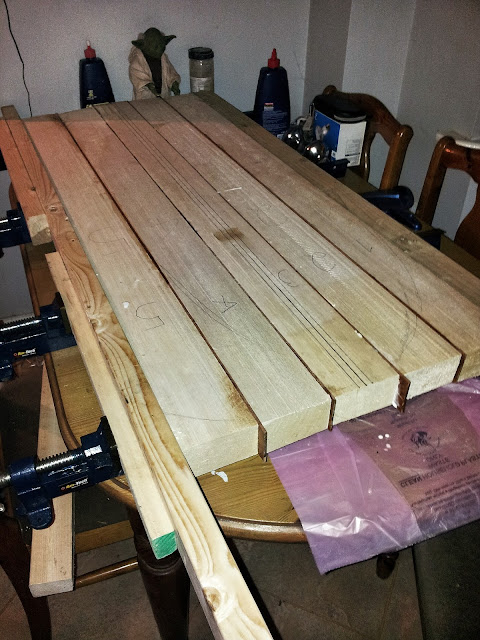 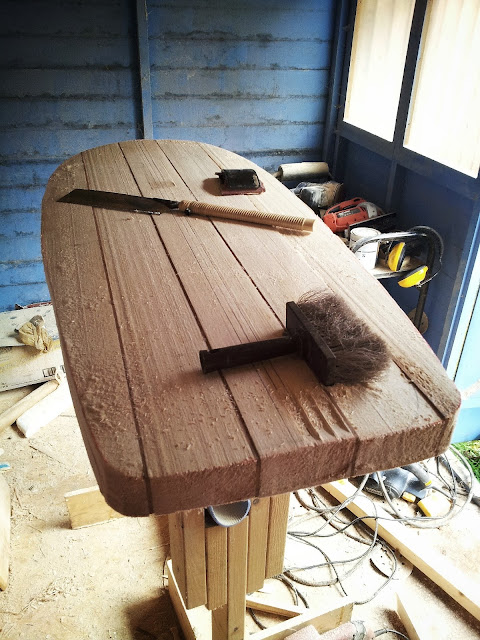 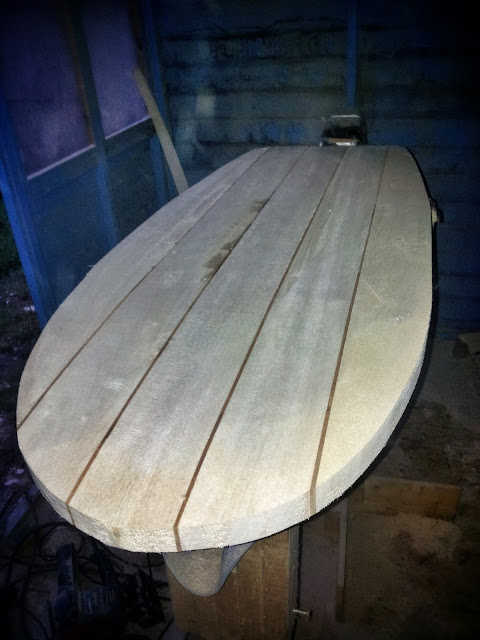 Now that The Coffee Table has been completed I've finally got a bit of time to get started on the balsa bodyboard that's been on the cards for the last few months. Namely a solid balsa bodyboard with some dark wood stringers.

I managed to get hold of five balsa planks from a supplier of wood for wooden aircraft which I teamed up with some unspecified hardwood that I bought at local DIY store Homebase. As sod would have it the hardwood planks were slightly too short to simply be cut in half and were slightly too narrow to be used as was so I ended up having to buy 5 planks, split one in to four then cut and glue the strips to match the balsa planks.

The original plan was to create a chambered balsa paipo based on the design of my Catch Surf Beater board, primarily because the five planks teamed up roughly matched the size of the Beater board, however as board wasn't especially thick I decided that the benefits in weight reduction weren't worth the reduction in structural integrity so a solid beast she shall remain. 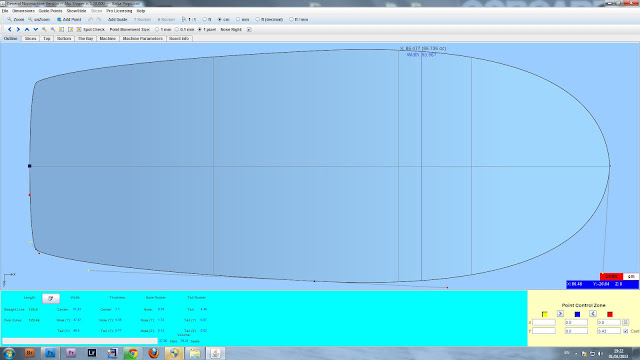 The shape of the board is based on The Jubilee Sim board with a slightly more pulled in nose and slightly straighter outline. One thing that I'm looking forward to with this board is playing around with concaves and channels that would be a lot more complicated to replicate with a hollow wooden board.

The deck of this board for example will have a very pronounced concave to allow for comfortable lying position and am also planning on integrating a hand rail around the edge to allow greater control. The deck on the other hand will have a mix of concaves, belly and channels, again similar to the Beater board. My intention is for the board to be primarily finless but will be creating two small single FCS plug compatible fins for some extra control should it be necessary.

At any rate this is a board that I'm very much looking forward to seeing come to fruition, she hasn't been a cheap acquisition so far so I need to take my time in the build to keep her as perfect as possible but I get the feeling she's going to be quite a looker when she's finished! 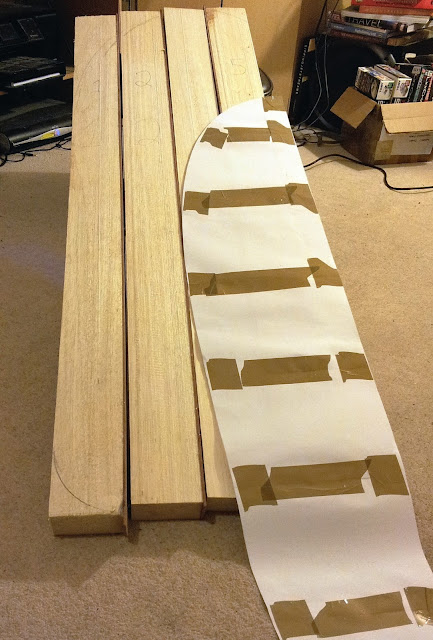 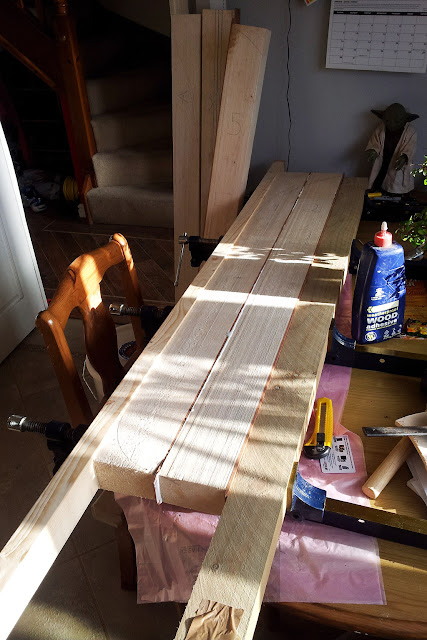