About time I made a decent attempt at an alaia 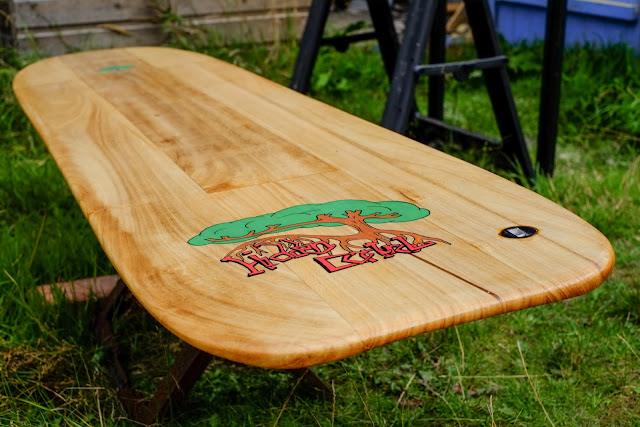 I can't imagine how anybody who has watched footage of alaia surfing could not want to have a go. Had a crack a couple of years back but it was not too successful. It wasn't the prettiest of boards, the concave was too shallow so it had absolutely no traction on the wave and it was too long. At least I had a target for what to achieve this time round!

The peanut alaia, as popularised by Rob Machado, isn't not the easiest to ride by all accounts but it is the prettiest in my opinion and as I've always been a big believer in style over substance, that was the shape I went for.

The eagle eyed amongst you might have noticed that it looks like the board is made from planks that are too short and you would be right. Being that the longest strips of paulownia I had were 150cm long I had to biscuit joint them together, this was the one aspect of the last alaia that I was quite pleased with. By staggering the joints the board seems to stay strong, and test bends show that it doesn't seem to affect the flex to any degree.

Still got a bit of the graffiti bug which inspired the design and to protect the paint I've applied a couple of coats of varnish which has given it a glossy finish. Haven't had an opportunity to ride her yet but she looks an awful lot more manageable than the last one! 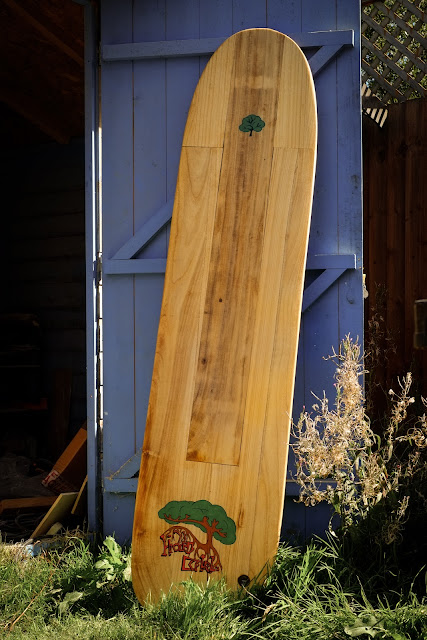 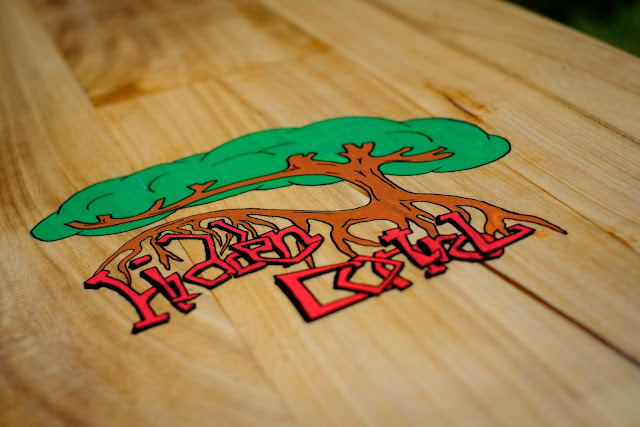 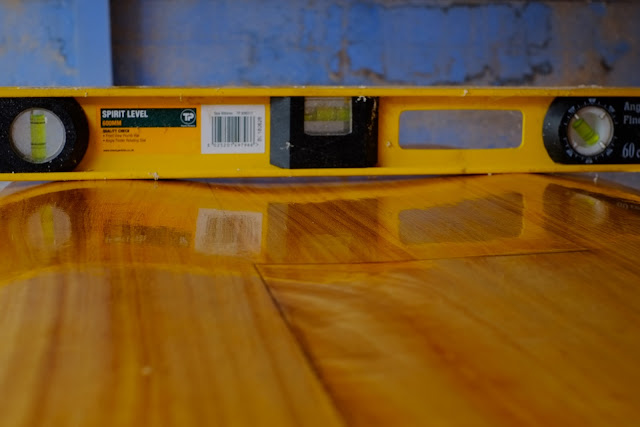 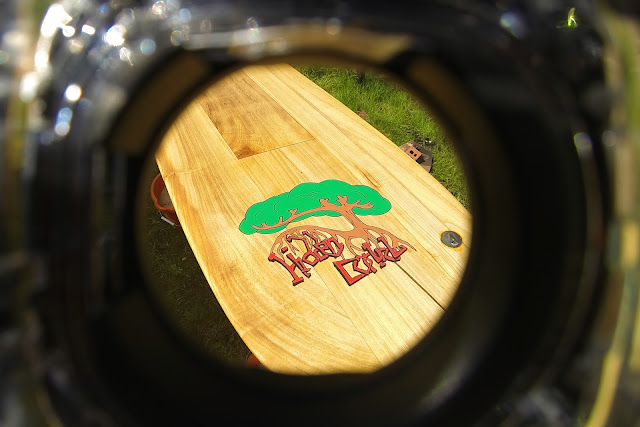 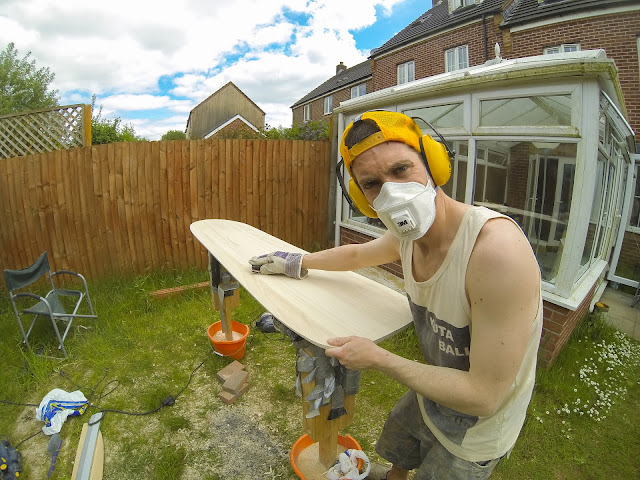 J-Lo 3 Finally Ready to be Launched 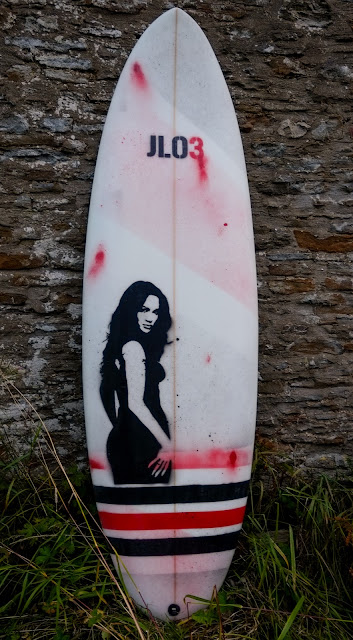 Well it's taken the best part of a year longer than I originally intended but the new J-Lo is ready to roll! Incidentally J-Lo the first was a 6'6 Surftech Geoff McCoy Nugget and so named because of her large rear. J-Lo 2 was my attempt at making a shorter, more manoeuvrable nugget that wouldn't try and kill me when I tried to duck dive large waves (J-Lo was a big girl). She didn't go to plan and looked horrendous, so I won't be showing pictures, but she was a surprisingly competent board, and the quad set-up was a winner for me.


Since J-Lo 2 I'd also made the Jubilee Sim, an unqualified success who has been my go-to board for the last year in all manner of conditions. For J-Lo 3 I wanted a board that would live in the van for the foreseeable future so wanted to bring together my favourite aspects of my last three boards and this is the end result.


The outline is very close to my nugget but with a wider nose, more reminiscent of McCoy's Astron Zot. I used the same blank as for the Jubilee Sim so the main planing area is very similar but at 5'8 she has more rocker in the tail and I shaped a lot more into the nose to allow for steeper drops, an aspect of the Sim that puts some hairs on your chest when the waves pick up. 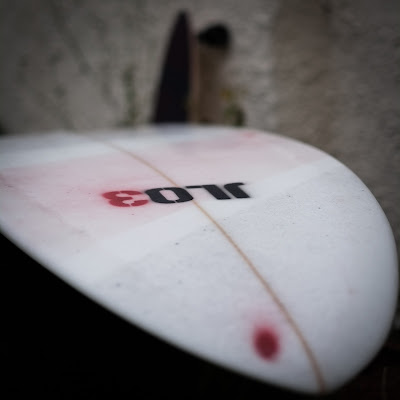 The round tail is a copy of the Nugget except that it has a bit less thickness so I could add a touch more rocker, this being a fish blank so was quite flat originally. I like having a lot of volume in the tail just because it makes it easier to paddle into waves, but the round tail is more conducive to carving than the square tail of the sim.


Being that this board is half a foot longer than the sim I took an inch off the width to keep volume broadly similar. I also kept the sims hard rails which I was quite pleased with before, this time though I added a bit of a step in it to make them a bit thinner and so easier to bury in wave when carving. This was an idea I stole after reading some reviews of Firewires new Baked Potato. I also copied the Baked Potato's twin concave in the tail instead of the sims single concave, the twin seeming to have favourable reviews. 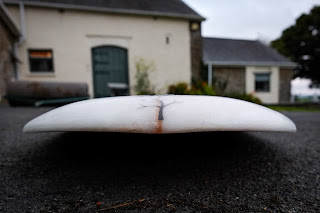 J-Lo 2 hasn't been totally forgotten, I kept the fin set up the same so it will be strictly a quad. I also kept J-Lo 2's 'S-Deck', basically I've scooped a lot of volume from the deck side of the nose from just above chest level up. This is to counter act one of the worst aspects of the original J-Lo, that she was a bitch to duck dive. I'm hoping a lot thinner nose along with a more parallel nose shape should help with this but there's only one way to find out. 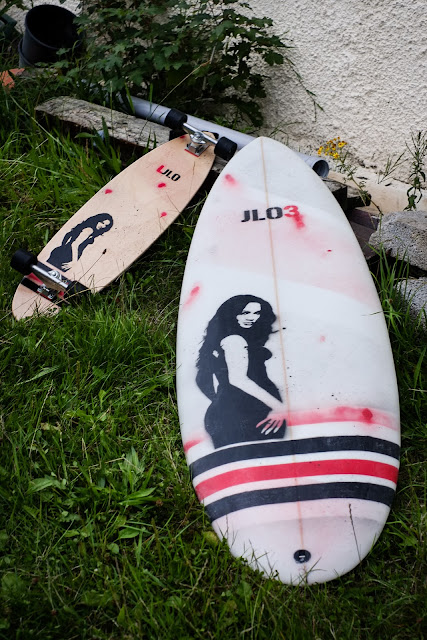